Cyanobacteria - Tapping into the risks to drinking water 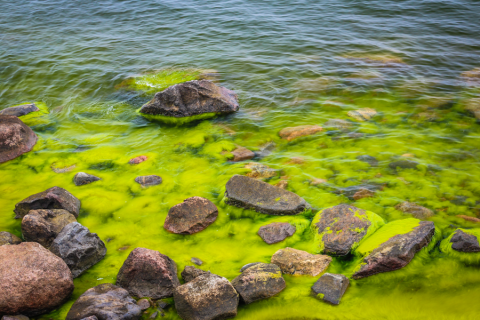 What do dog deaths in Fredericton, a State of Emergency in Salem, Oregon, and vacuuming lakes in Florida all have in common? All of these events over the past year have been triggered by microscopic photosynthetic organisms called cyanobacteria.

Perhaps more commonly known as blue-green algae, there are over 2000 species of cyanobacteria found in aquatic environments. Under ideal conditions of plentiful nutrients, warm temperatures (e.g. > 20 °C) and calm water conditions, these organisms can rapidly multiply forming a cyanobacterial bloom (cyanobloom) in affected lakes, reservoirs or rivers. Bloom season in Canada is typically between May and October, although cyanoblooms have been observed year round in some locations. Blooms can be bluish-green, green, red or brownish with the consistency of pea soup or paint, usually accumulating at the water surface, although mats may also form on river or lake beds.

Why are cyanobacteria a concern?

Cyanoblooms can be unsightly and odorous and can result in beach closures resulting in negative impacts on tourism and local businesses. The unsightly appearance is only part of the problem. Beneath the water, a cocktail of toxins (cyanotoxins) produced by the cyanobacteria can cause health effects for humans and animals exposed through direct contact or by drinking contaminated water. Cyanotoxins can affect the liver (microcystins and cylindrospermopsins) or nervous system (anatoxins and saxitoxins) and can cause generic health effects such as skin irritation, gastrointestinal illness, fever and headache. One microcystin variant (MC-LR) has been identified as possibly carcinogenic to humans.

What does this mean for drinking water safety?

Although cyanoblooms have affected Canadian waterbodies for many years, the focus of public health responses have largely been associated with reducing recreational exposure. High profile cases of dog deaths resulting from contact with cyanoblooms have gained widespread media attention and increased awareness of risks in recreational waters. The risks to drinking water are less well publicised. Cyanotoxins can enter drinking water where a bloom occurs near a supply intake and treatment systems are not equipped to remove both the cyanobacterial cells and the released toxins. Small or private water supplies with limited treatment may be most at risk. Measures such as boiling water or disinfection do not remove cyanobacterial cells, and can sometimes make the situation worse by causing cells to burst, releasing toxins into the water.

While there have been no reports of acute cyanotoxin poisoning from drinking water in Canada to date, there is some evidence that low levels exposures can occur, and affected drinking water users may experience mild symptoms. There is still some uncertainty about the level of exposure for users of small and private water systems, and the impacts of chronic exposure to low levels of multiple toxins for all systems on affected waterbodies. Most Canadians receive their drinking water from lakes and reservoirs, and increased occurrence of cyanoblooms due to pollution or climate change could increase the risk of negative impacts on some drinking water supplies served by affected waters.

The NCCEH has recently compiled a report on Cyanobacteria and Drinking Water that explores the occurrence of cyanoblooms, risks to health, approaches to management of risks and knowledge gaps for public health. For further information, check out our Cyanobacteria in Freshwater topic page for additional resources.