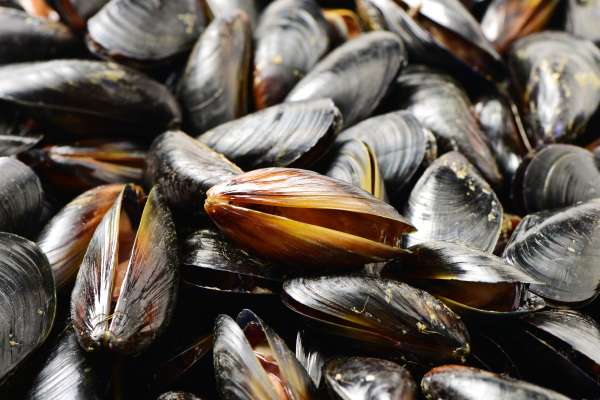 The Washington State Department of Fish and Wildlife in collaboration with The Centre for Urban Waters, University of Washington/Tacoma reported detecting “contaminants of emerging concern” (CECs) in transplanted mussels collected in 2012/2013 from locations near urbanised areas around Puget Sound. According to their presentation at the Salish Sea Ecosystem Conference (Seattle, May 04, 2018), investigators re-analyzed mussel tissues collected in 2012/2013 and identified over 200 pharmaceuticals including trace amounts of antidepressants, antibiotics, detergents (synthetic surfactants), heart medications and the chemotherapy drug Melphalan, among others. They also found traces of the opioid analgesic oxycodone in mussels taken at 3 of 18 locations (17%). The finding of an opioid in mussels received extensive media coverage.

Pharmaceuticals enter fresh and saltwater environments through human consumption and subsequent excretion in urine or when people flush medications into the wastewater system. Effluent released from wastewater treatment plants into nearby aquatic environments has been shown to contain a variety of CECs. Conventional 2-step wastewater treatment minimally or only partially removes many pharmaceuticals, including opioids. Further, concentrations of CECs in wastewater have been used to monitor shifting patterns of opioid use in the US, Spain, Croatia, Norway and Australia.

Mussels are useful “sentinel” species because of their wide geographic distribution and their ability to bio-accumulate pharmaceuticals from surrounding waters. Mussels filter feed and effectively bio-accumulate anthropogenic contaminants in their tissues and, unlike finfish, mussels poorly filter out or metabolize pharmaceuticals, including oxycodone. A recent Ontario study compared oxycodone concentrations in water with those in mussels, leading to the calculation of a mean bioaccumulation factor (from water to mussel tissue) of 9.86 (84% confidence interval: 0 – 24).

The detection of CECs, including opioids in water and mussels, is ecologically important as CECs affect the growth of organisms, their hormone systems and reproductive capacity.3,9,26-29 Few studies have investigated the effect of CECs on the marine environment and nearly all have focussed on marine mammals and on risks associated with long-term exposure to compounds with bioaccumulation potential, such as endocrine disrupting compounds (EDCs).

Would the Tested Washington State Mussels be Safe to Eat?

In spite of the ecological risk, the likelihood of pharmacological effects on humans of oxycodone from consuming contaminated shellfish appears negligible; first, mussels in the Washington State study were collected near urbanized areas for research purposes and not from commercial shellfish beds, which are considered to be pharmaceutically clean. Second, the potential dose of opioids from this source would be extremely low: we were informed of oxycodone concentrations of 1.5 ng/g, 1.2 ng/g and 0.68 ng/g wet weight in mussels at their Seattle and Sinclair Inlet/Bremerton sites  by the Washington Department of Fish and Wildlife (James West, June 25, 2018). We calculate that for a person to ingest 10 mg of oxycodone, an average adult dose, given the highest reported concentration of 1.5 ng/g in mussels, they would need to consume 6,700kg of mussel meat, or about 466,660 mussels. Finally, there are no known case reports of adverse events from the consumption of shellfish contaminated with opioids. A Broader View of Risks to Human Health

Given the negligible likelihood that consumers of mussels contaminated with trace amounts of opioids can ingest enough of the pharmaceutical to be affected by it, the Washington State research study does illustrate the larger issue of CECs in the environment and its potential adverse human health impact. Many studies have shown that concentrations of pharmaceuticals found in the environment are relatively small, but that risk to human health cannot be excluded, as these emerging contaminants are inconsistently monitored and poorly studied. CECs of greatest concern include those which may not pose an immediate effect through acute exposure, as most of these contaminants are found in relatively small concentrations, but rather  through long-term exposures, particularly for compounds with a high bioaccumulation potential. Key questions remain regarding the safety profile of long-term exposure to these pharmaceuticals, as well as the potential synergistic effect of exposures to mixtures of pharmaceuticals.
With respect to exposure to pharmaceuticals from the consumption of contaminated seafood, little is known about the extent to which humans are exposed through biomagnification up the food chain.  Nevertheless, adverse human health impacts have not been associated with the consumption of drinking water or seafood contaminated with pharmaceuticals. Further research should include specific populations at increased exposure risk due to dietary practices, including First Nations populations.
There has also been concern about drinking water contaminated with CECs. With respect to the human health risk of drinking water contaminated with trace amounts of pharmaceuticals, research to date has found minimal evidence of adverse effects. Concentrations of pharmaceutical compounds in contaminated water are typically orders of magnitude below levels considered acceptable.

The authors would like to thank James E. West and Jennifer Lanksbury, Washington Department of Fish and Wildlife for their assistance with data from the original study and Lorraine McIntyre, Food Safety Specialist, BCCDC for her assistance in the calculation of the oxycodone dose in mussels.  Thank you to Dr. Shovita Padhi, Medical Officer of Health, Fraser Health Authority, who asked that BCCDC comment on the Washington State findings.

The authors have no commercial interests or funding that present a conflict of interest for this article.